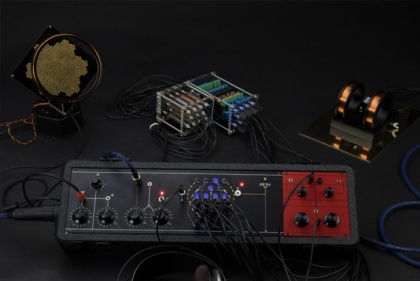 For the Future Project, Sam Conran will present a new sound work on behalf of Hackney City Council Pagan Association that will be made with a Kabbalistic Synthesizer and generated media taken from 3 bronze age neolithic stone circles on the eve of the festival, The Merry Maidens 50.06504°N 5.58973°W, Boscawen-Un 50.08978°N 5.618847°W and Boskednan – Nine Maidens 50.16055°N 5.59372°W. Sam will perform a 30 minute session where the three sets of recordings will be synthesized live.

The Kabbalistic Synthesiser is a device that generates sound based on three live,‘realtime’ scientific observations that work together to alchemise sound (in concrete) from ethereal, intangible cosmic events. These being, the Earth’s Magnetic Field, Jupiter/Jovian Decametric Noise and Cosmic Rays. The device is scientifically rigorous and ‘REAL’!! Made in collaboration with Imperial College Blackett Lab for Physics and the Royal College of Art in 2015. It has been performed and present at Moogfest, North Carolina 2016, Act Festival Korea 2016 and was nominated for the ARS Electronica STARTS prize 2016.